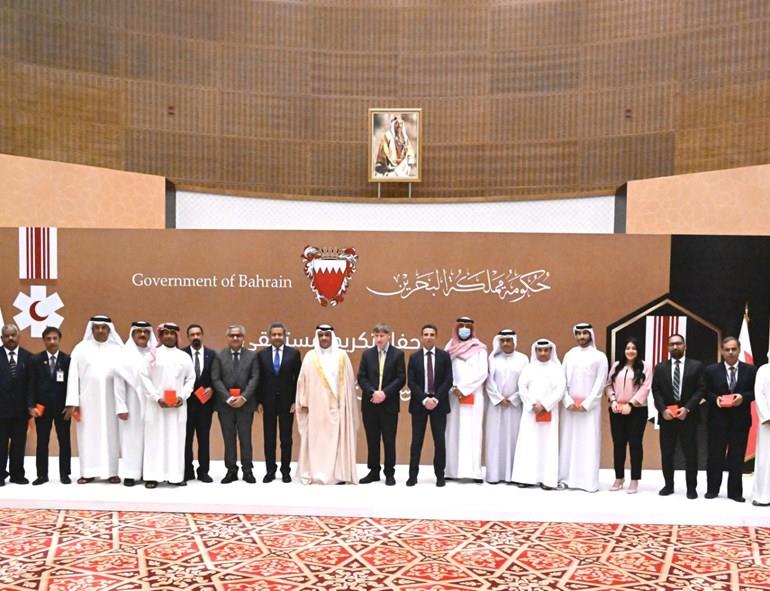 The Minister of Transportation and Telecommunications, HE Kamal bin Ahmed Mohammed, reaffirmed the appreciation of His Majesty King Hamad bin Isa Al Khalifa and His Royal Highness Prince Salman bin Hamad Al Khalifa, the Crown Prince and Prime Minister, for the sincere efforts of all front-line workers in combatting the COVID-19 global pandemic. This strengthens the Kingdom’s resolve, motivating its people to continue on the same path. HE the Minister praised the efforts of BAC and Telecommunications Regulatory Authority (TRA) employees in carrying out their duties for the good of Bahrain, emphasizing that even greater efforts are required to maintain the Kingdom’s achievements to date, realize its national goals, and raise its profile on regional and international stages.

HE the Minister’s comments came during a ceremony honoring BAC and TRA employees with the Prince Salman bin Hamad Medal for Medical Merit, in line with a royal order and directives by His Royal Highness, the Crown Prince and Prime Minister to present medals to members of the health sector, the Bahrain Defence Force, the Ministry of Interior, and all supporting bodies.

HE the Minister congratulated the recipients, expressed his thanks and appreciation to all the honorees for their valuable contributions towards Team Bahrain’s efforts to address the pandemic, and wished them continued success.

The honourees expressed their pride in receiving this prestigious award, which is an incentive to continue giving their best in serving the nation.

You just clicked on an external link.

You can return to the page on Bahrain International Airport that you were reviewing by clicking RETURN or you can click CONTINUE to visit the external website page you requested.

Invalid Captcha
Note: This notification is active only for 24 hrs starting from the moment of the request.
Selected flight no. - is already .
Feedback